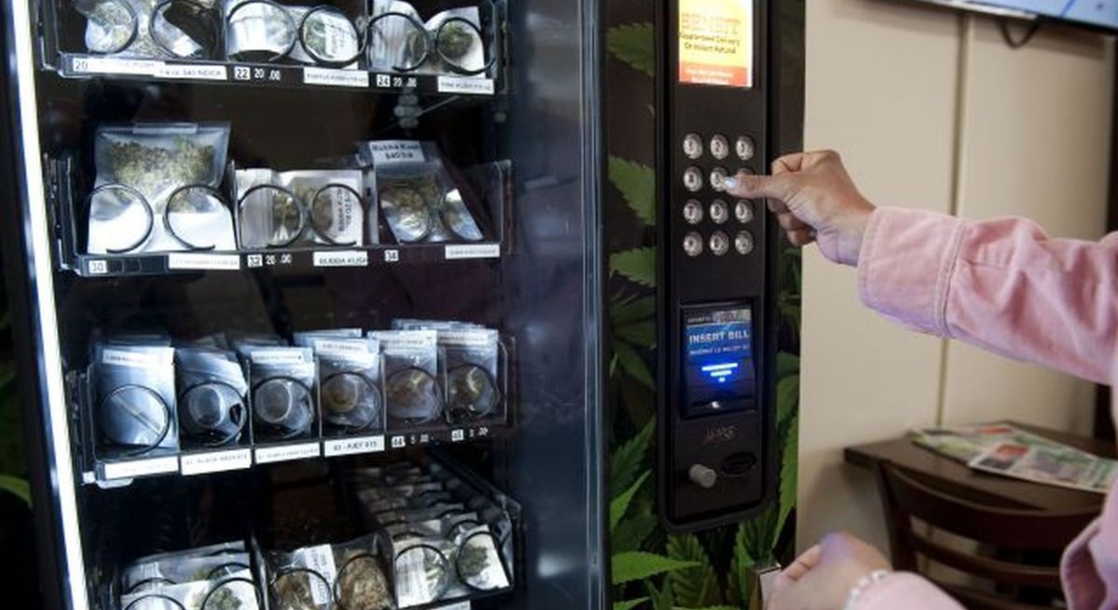 Boston-based tech company anna (written all lower-case) announced plans to roll out cannabis vending machines in dispensaries across the state this September, making marijuana a treat like soda, chips, and candy that you can summon with the push of a button. Imagine that: Getting weed and munchies in the exact same way!

A video on anna’s website demonstrates how the system works. Customers can browse online or use dispensary touch-screen devices to create their orders. An on-site agent verifies the customer’s age, takes their payment, and wirelessly unlocks the vending machine, which acts as a self-checkout kiosk. The entire process reportedly takes less than one minute.

As with other businesses, cannabis dispensaries have had to create social distancing solutions, and anna is touting its program as an effectively dynamic answer to that. Such is the age of COVID.

On one hand, however, companies also install self-checkout devices simply to cut down on employees and discourage unionization. With Massachusetts dispensary workers increasingly voting to join unions, an automation move suggests that perhaps the once warm-and-open realm of retail weed shops is now coldly embracing that capitalist mission to maximize profits.

“It’s about getting customers through faster with less contact,” anna CEO Matt Frost said, striking a tone of noteworthy neutrality. “A self-checkout solution does lend itself well to these times. There’s a bigger appetite for what we’re doing now.”

A press release from anna also laid out how the machines can reduce the physical space of dispensaries. “A typical anna setup involves three to four units placed on the dispensary or retail sales floor, creating a subnetwork within anna’s larger cloud architecture. The interior can be configured to accommodate products of all sizes, and its capacity exceeds 2,000 products in a footprint just under 8 square feet.”

So what was once a face-to-face, “get-to-know-your ganja” human-to-human experience can now be reduced to a robotic funds-for-goods exchange in icily efficient, closet-sized outposts.

The puff-and-ponder question now, however, is this: Does community-eschewing, big-money-motivated convenience actually enhance the cannabis experience? It’s hard to say because human connection is central to pot — it always has been. But with a number of weed companies aiming to model themselves after massive capitalistic corporations, such as the Apple Store, it’s not surprising then that removing the human interaction aspect of buying weed is now getting removed from the retail experience.

Barbados Is Inches Away From Decriminalizing Cannabis Possession

Barbados Is Inches Away From Decriminalizing Cannabis Possession