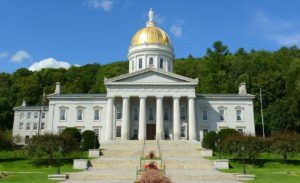 The adult-use marijuana club of the United States just grew to 11 with the addition of Vermont on Wednesday.

Gov. Phil Scott, a Republican, announced that he would permit legislation to regulate and tax cannabis sales to become law without his signature, according to a news release from the governor’s office.

The news, which sets the stage for yet more growth of the U.S. cannabis industry, was hailed by the Marijuana Policy Project (MPP) as a major victor, especially considering that Vermont is only the second state in the nation to legalize adult use via the legislature and not at the ballot box. Illinois did so in 2019.

Recreational sales in Vermont are not expected to begin until October 2022.

Although Vermont legalized the possession and use of recreational marijuana in 2018, lawmakers at the time declined to authorize any framework for the legal production and sale of adult use cannabis.

Vermont lawmakers in September gave final approval to S. 54, which picks up where the 2018 law left off.

“The significance of Vermont’s decision to legalize and regulate cannabis sales, especially in a state with a Republican governor and through the legislative process, cannot be overstated,” MPP Executive Director Steven Hawins said in a news release.

“This is an historic move that adds to the momentum of our movement and underlines its breadth and depth, and importantly, it comes as other state legislatures are poised to seriously consider legalization in the very near future.”

MPP’s summary of the bill can be found here.

Although Scott declined to sign into law a bill that establishes a formal framework for the production and sale of recreational cannabis, he nevertheless allowed the measure to become law without a veto.

In a  letter to the president of the state Senate, he wrote that Vermont lawmakers still have work to do.

Scott said he declined to sign the bill because it didn’t address multiple concerns he has, including: