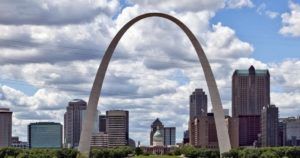 MJBizDaily takeaway: Put another pin in the U.S. map of states that have legalized medical cannabis. The Marijuana Business Factbook estimates sales in Missouri could hit an estimated $650 million a year by 2024.

It’s too early to predict what could happen in the state by way of adult use. But if this chart is any indicator, recreational cannabis might be on its way to Missouri sooner rather than later.

On a much more limited scale than Missouri, Virginia opened its first medical marijuana dispensary.

Medical marijuana products in the state are limited to oils, edibles and vape cartridges with single doses capped at 10 milligrams of THC.

MJBizDaily takeaway: The 2020 Marijuana Business Factbook projects medical cannabis sales in Virginia will reach $45 million-$55 million by 2024, or well below those of Missouri.

But Virginia’s new market is another sign that the wall against marijuana legalization is eroding in the South.

On top of that, smokable flower is expected to be added to the MMJ product offerings in the new future, which could significantly boost sales.

A last-minute lawsuit was filed to stop Montanans from voting to legalize recreational marijuana on Nov. 3. But ultimately the pro-cannabis side came out ahead.

A group named Wrong for Montana tried to argue the taxation and regulation initiative violated the state’s constitution. But the Montana Supreme Court disagreed and promptly dismissed the suit.

MJBizDaily takeaway: Pro-marijuana advocates in Nebraska wish they’d had the same outcome after their medical marijuana initiative suffered the opposite fate in another last-ditch effort by prohibitionists.

But Montana voters will get an opportunity to decide on adult-use legalization next month. And the business opportunities could be robust.

A recent study projects sales could top $200 million in the first year of operation in 2022.

The new rules simplify the application in several areas, including the amount of information needed to apply for an adult-use license.

MJBizDaily takeaway: While this might come as good news for the business applicants waiting in the queue or those eager to apply, the rest of the state’s industry is likely wondering why it’s necessary.

Oregon has long been considered a state with one of the lowest barriers to entry, which has caused overproduction of cannabis flower and led to market attrition.

Making it easier for more businesses to enter the market might be seen as counterproductive to the health of the market – though lower prices would be a boon for cannabis consumers.

MJBizDaily takeaway: Canada has fared far better with the coronavirus outbreak than the U.S., and as stores reopen and new shops come online, cannabis consumers are venturing back into legal marijuana outlets.

The National Football League Players Association is discouraging athletes from endorsing products that contain CBD or other cannabinoids.

In an email to its members, the NFLPA wrote: “NFL players, coaches and other employees must not endorse or appear in advertisements for alcoholic beverages, tobacco or cannabinoid products.”

MJBizDaily takeaway: While sports leagues, including the NFL, have loosened bans on cannabis – both marijuana and CBD – they are still not embracing the idea of players using such products, a move that limits their opportunities to land sponsorships.

CBD and marijuana companies tend to enjoy celebrity endorsements to help boost brand awareness, but they’ll have to wait until organizations such as the NFL get on board.

It's Harvest Time For P.E.I.'s Budding Community Of Cannabis Growers