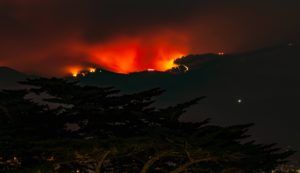 Many California marijuana farmers are struggling with the aftermath of recent wildfires in the state, even if their farms went untouched by the blazes.

But those affected have said they’re just as determined as ever to continue growing.

One Santa Cruz County nonprofit farm is worried that its 300 plants might dry up before staffers are allowed to return to the property because of mandatory evacuation orders that remained in place as of Aug. 28.

“Our property didn’t burn … but the tragedy is access,” said Jeff Nordahl, the property owner where WAMM Phytotherapies has one of its grows.

“We can’t get in to water our plants. So, instead of dying by fire, the entire farm may end up dying because we can’t water it.”

Nordahl said he’s hoping the local authorities will allow them back on the property soon, but he had no idea when that might be.

Still, WAMM’s operators are grateful that the situation hasn’t been worse, and Nordahl emphasized he knows other Californians and marijuana farmers who have lost everything.

“We’re completely safe. We have tremendous gratitude for that. The reality is we can always grow more cannabis,” Nordahl said.

A separate wildfire that’s been burning for several days in a remote eastern part of Mendocino County has yet to directly impact any marijuana farms.

But some insiders there are concerned about the possibility that smoke damage could ruin their crops.

Reiman said the true impacts might not become apparent until after crops are harvested and sent for lab testing. Smoke from burning structures is often more toxic than smoke from burning trees.

The burning structures, she said, could cause marijuana crops to fail lab tests, which could then become a major financial loss for farmers.

“The truth is, we don’t know. It’s really hard to tell until the crop is finished and then it’s been tested, as to whether it’s had any impact,” Reiman said. “I’m knocking on all the wood.”

In Yolo County, to the west of Sacramento, Preferred Gardens was spared by wildfires but will still take a serious financial hit, a company spokesman said via email.

“We are still evacuated and the roads are closed to our farm, luckily we have an alternative route cutting through a couple hundred acres of walnut farms,” the spokesman wrote.

“The LNU fire got within acres of the farm. Our flowering plants definitely took a harsh hit from the smoke … but we are so blessed to be operational still.”

Fire season a long way from over

In Nevada County near Tahoe, only one licensed farmer out of about 100 was affected by the recent fires, said Diana Gamzon, the executive director of the Nevada County Cannabis Alliance.

But Gamzon said the recent fires are a frightening preview of what might be in store later this year considering wildfire season traditionally stretches into November.

“Wildfire season came early this year. We’re just bracing for September, October and November,” Gamzon said. “We’re so not out of the clear. What we’re trying to do is educate farmers how we can best prepare.”

Gamzon said many of the farmers in her county, as in Mendocino, are concerned about the potential impacts of smoke and ash damage to their crops. And she agreed with Reiman that it’s simply too soon to tell the true effects of the fires.

But, Gamzon added, the local cannabis business community has hung together and supported each other.

“The bigger story here … is how the community rallied together to prepare,” Gamzon said.

“We had one of our local distributors who was seeing flames come over a hillside as he was rescuing someone’s crop to bring it safely to his licensed facility in downtown Nevada City.”

The distributor, Rough and Ready Goods, picked up crops from several farms as a precautionary measure to help out neighbors, and those crops were even moved later as the fires shifted, Gamzon said.