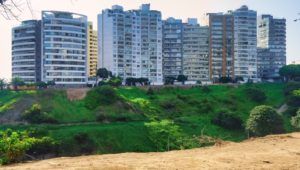 Medical marijuana companies seeking to serve patients in Peru have been stymied by government red tape, but that appears to be slowly changing with a handful of products poised to begin trickling into the Andean country.

A Lima-based company said it was able to import CBD oil in bulk into Peru for the first time, although hurdles remain before the product reaches patients.

Anden Naturals CEO Curt Schwarz told Marijuana Business Daily it became the first – and, so far, only – company to import CBD in bulk for supplying pharmacies.

The cannabinoid will be dispensed under prescription as customized, or magistral, preparations to patients.

But a new obstacle awaits Anden Naturals: finding pharmacies that can dispense the product to patients, because only a handful are believed to be authorized for such activity.

Before dispensing medical cannabis, pharmacies must apply for a special security approval from DIRANDRO – the anti-narcotics unit of the Peruvian national police – and then obtain a cannabis-specific OK from health authorities.

It’s a stark reminder why producers should err on the side of caution when planning their route to market.

Maritza Reátegui, a Peruvian lawyer who counsels on pharmaceutical matters, told MJBizDaily that part of the reason so few pharmacies have sought approval from authorities to dispense medical cannabis is that a specific permit is needed for each physical retail location.

“Pharmacy chains are naturally more inclined to be the first ones interested in selling these new products, but if a company has 20 pharmacies in different locations across the country, 20 applications to 20 different regional health authorities could be needed. That becomes burdensome and takes time,” Reátegui said.

“In addition, this is still all quite novel for pharmacies. Many prefer to first wait and see how the market begins unfolding instead of trying to be the pioneers.” 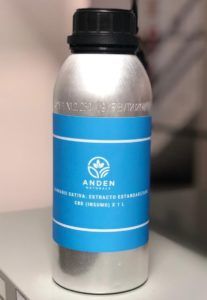 Anden Naturals is looking to supply Peruvian pharmacies with CBD in 1-liter bottles like this. (Photo courtesy of Anden Naturals)

Anden Naturals is not the only company that is close to selling magistral preparations with CBD in Peru.

Khiron Life Sciences – which has cultivation and manufacturing operations in Colombia – expects to start sales in Peru this month.

The Toronto-based company’s subsidiary in Peru is already licensed to import cannabis.

Khiron secured an exclusive agreement with Peruvian Farmacia Universal for the pharmacy chain to dispense the company’s products as magistral preparations.

Farmacia Universal is one of the few pharmacies already fully approved by authorities to dispense medical cannabis, which means that once Khiron imports the first products, it will not face the challenge of searching for a pharmacy.

Luis Márquez, Khiron’s country manager in Peru, told MJBizDaily that the plan is to start selling the company’s products to patients in September.

“From a regulatory point of view, everything needed is already in place both from the Peruvian and Colombian side,” Márquez said.

“The only thing that’s missing is to ship the product from Colombia to Peru, and once it arrives, we can start selling through Farmacia Universal right away.”

According to Márquez, one of Farmacia Universal’s retail locations has already been approved to dispense medical cannabis, but the pharmacy chain is applying for more of its retail locations to get the needed authorization.

The Peruvian medical cannabis market has grabbed significant attention in recent months because the country is, at this stage, fully dependent on imports, according to the second edition of Marijuana Business Daily’s Latin American report.

With dozens of countries trying to capitalize on export opportunities but only a handful of them importing meaningful quantities, export-oriented producers are paying close attention to import-dependent jurisdictions.

Peru also offers the advantage of having a regulatory framework that allows different types of products to be available for patients, which include both registered medicines and magistral preparations.

But, as is often the case, it takes time for reality to catch up with what regulations allow.

Almost three years later, the only legal medical cannabis product currently available to patients in the country is a CBD oil sold in a single government-owned and operated pharmacy in Peru’s capital city, Lima.

The government pharmacy bought 10 liters of CBD oil at the end of 2019 and another 50 liters this year – both times from Anden Naturals, which imported the product from Oregon and delivered it to the Peruvian government, Schwarz told MJBizDaily.

The government pharmacy sells the oils as magistral preparations under its own brand.

Even if Canopy imports the first registered products from Canada and Cann Farm from Uruguay, the companies would still need Peruvian pharmacies approved to dispense cannabis before the products can reach patients.

Both companies are expected to confirm their local distribution partners and availability soon.

“Spectrum Therapeutics is finalizing the import of its registered product Spectrum Yellow Oil as well as in-country distribution and in addition to ongoing educational activities,” Niklaus Schwenker, director of communications and strategy for Canopy Growth Latin America, wrote in an email to MJBizDaily.

“We look forward to serving Peruvian patients with product in-market in the coming months.”

Although the Peruvian regulations allow in-country production, no cannabis production licenses have been issued.

The DIRANDRO is responsible for inspecting facilities before companies can begin production.

The company has 60 hectares (148 acres) available to start growing, he said.

Since March, Cann Farm Peru has had the requisite authorization as a pharmaceutical laboratory issued by the Peruvian health authority.

But DIRANDRO has not inspected the facility or approved the security protocol, a bottleneck that is effectively preventing the inaugural production in the country.