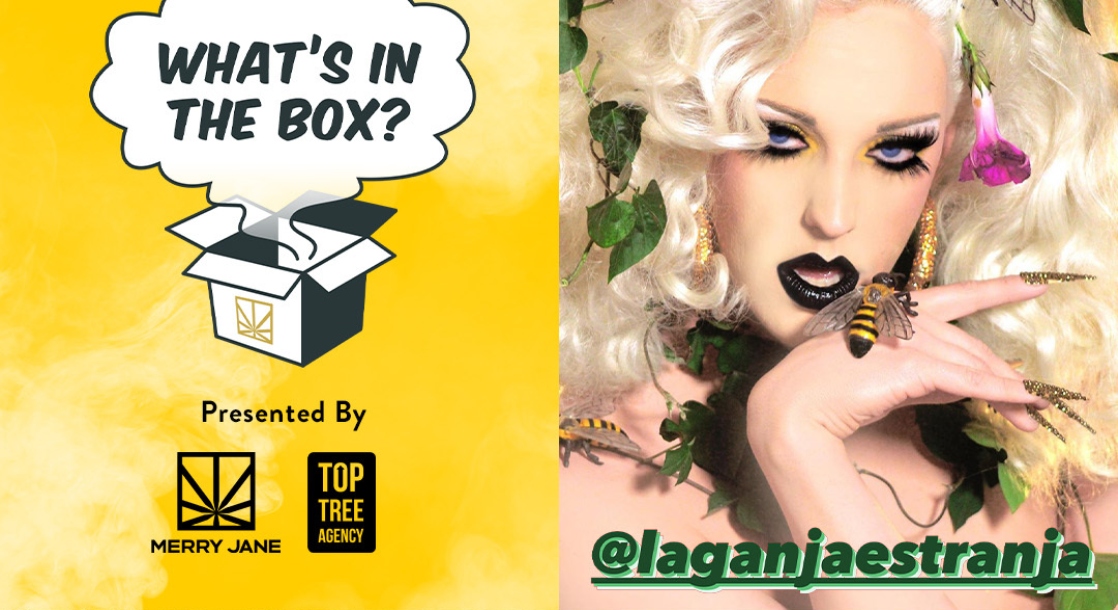 Yesterday at 4:20 pm PT the team at MERRY JANE finessed an iconic virtual smoke sesh between rapper Guapdad4000 and legendary drag queen Laganja Estranja for our latest Instagram Live series, “What’s in the Box.”  In collaboration with ZigZag, we sent Laganja, the host of our new show, and Guapdad mystery boxes full of 420 smoking essentials, weed, and swag, and had them reveal what’s inside. The duo took dabs, rolled joints, showed us their digs, and threw down on an epic smoke sesh.

Ms. Laganja Estranja showed up looking more glam than David Bowie during the 1972 Ziggy Stardust tour. Her fiery red hair matched her equally spicy lips, and her dark green eye shadow and chíc fan-leaf dress gave her a charming fairy-goddess vibe impossible not to love. Guapdad rocked a luxury-spa look. He lounged in a red robe with a black bandana tossed over his head, while sporting light-blue lens sunglasses.

“I know you got a lot of upcoming projects, but before we get into that, are you ready to open this box with me?” Laganja asked Guapdad, eagerly waiting to dive in and get stoned.

“Man, I’ve been staring at this shit all morning trying to figure out what’s inside,” Guapdad said with a smile strewn across his face.

“I’ve been waiting two days to open the box,” Laganja said. “It’s about to go off!”

The duo wasted no time. Within seconds of opening the mystery box, Laganja pulled out dope ZigZag apparel, including a matching hoodie and a beanie. Guapdad unwrapped a joint tin and matching grinder from V-Syndicate with a psychedelic Einstein etched on the lids. They both received From Crook to Cook, Snoop Dogg’s cookbook and lip balm by Milk Makeup.

The party picked up as soon as Laganja found an eighth of Grapefruit Kush, and Guapdad discovered Venom OG pre-rolled joints. The weed was supplied by Packwoods, who also gifted them non-tobacco blunts dipped in wax and dusted in kief. You can guess what happened next…

Aside from getting an inside glimpse of Laganja and Guapdad’s respective lives, the best part about yesterday’s “What’s in the Box” premier is the fact it featured two wildly talented figures from seemingly opposite cultures. Laganja, representing our beloved LGBTQIA+ community, and Guapdad, showing up in the name of hiphop, made those two worlds collide — and it was beautiful. It’s the type of intriguing content the Internet, a bottomless well of mindless productions, needs more of.

We’re not interested in mainstream pairings or making vanilla content. We’re interested in the gritty, off-beat scenes that make life flavorful, fun, and weird, which is exactly what yesterday’s “What’s in the Box” live stream was.

Stay tuned for information on the next episode of “What’s in the Box!” And don’t forget to follow MERRY JANE, Laganja Estranja, and Guapdad400 on Instagram.