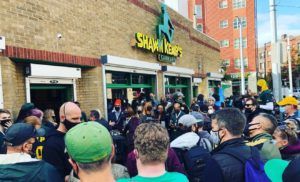 The Oct. 30 opening of Shawn Kemp’s Cannabis in Seattle drew a throng of customers.

Recent confusion over the botched announcement that a one-time sports star was the first Black owner of a retail marijuana store in Seattle highlights the lack of diversity in the city’s cannabis market, an ongoing issue in Washington state and the MJ industry.

Shawn Kemp, who played most of his National Basketball Association career in Seattle, is not yet the first Black owner of a recreational marijuana dispensary in that city – as had been widely touted in a news release and media reports in October.

But he is being added to the store’s ownership and will be a small-percentage owner when the paperwork is processed, according to state regulators.

Paula Sardinas, a lobbyist for Washington state’s Commission on African American Affairs, pointed out that the amount of attention this store opening received is further proof that more efforts are needed to achieve social equity in the state’s cannabis industry.

“We need to look at the barriers to access,” she said. “And we need to be committed to lowering those barriers.”

That led to conflicting news reports and complaints from Washington state cannabis industry officials who pointed out that Kemp’s name wasn’t on the initial business license.

The company later responded with a post on its website saying, “This statement should not have been released. As a result, it has caused great distraction to this store’s intention.”

Kemp’s name has since been added to the license on the Washington secretary of state’s website. However, his name is still not on the license with the same business identifier number on the state Department of Revenue’s site. 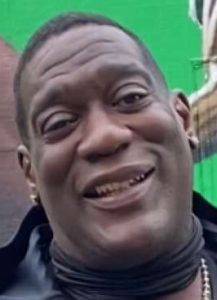 According to Brian Smith, spokesman for the Washington State Liquor and Cannabis Board, the current owners of the store are adding Kemp as a 5% owner.

“Overall, Mr. Kemp is the first person in Seattle to identify as ‘black or African-American’ among retail store owners in Seattle,” Smith wrote in an email to Marijuana Business Daily.

Smith added that the owners self-identified as white, Asian and Black after the addition of Kemp. The majority ownership is white.

Kemp, a newcomer to the industry and six-time NBA All-Star with the defunct Seattle Supersonics, is partnering with Matt Schoenlein and Ramsey Hamide – two of the co-founders of Seattle-based cannabis retailer Main Street Marijuana – as well as John Davis, Chelsea Dew and Tran Du.

“My name is on this company and I have worked hard to bring Shawn Kemp’s Cannabis to fruition,” Kemp said in a news release. “I have incredible partners in Matt Schoenlein and Ramsey Hamide.”

KD Hall, a spokeswoman for Shawn Kemp’s Cannabis, admitted that the initial news release was “inaccurate” but declined to comment on Kemp’s percentage of ownership. “We don’t feel it’s anybody’s business,” Hall added.

This statement was posted on Shawn Kemp’s Cannabis website:

“We understand that there is a large amount of ongoing pain in the community and particularly in the black community right here in the heart of Seattle and across the nation.

“We regret the unfortunate wording and misstep of that press release, which has caused further misunderstanding in the local community.”

Shawn Kemp’s Cannabis is a new business that assumed an existing license.

So the business license did not come from the pool of cannabis licenses being held for social equity, Sardinas said.

In the website statement, Shawn Kemp’s Cannabis said it envisions itself as a “social equity incubator” where people of color and women can train to become successful cannabis store owners, a part of the social equity movement that advocates often push for.

“We want to do our part to help grow diversity in the industry,” the statement notes.

According to spokeswoman Hall, the business has a strategy in place to open four more stores, and Kemp’s amount of ownership will increase with those new stores.

Smith with the LCB noted that it’s “not unusual for licensees to change their entity structure and add new owners or to make trade name changes.”