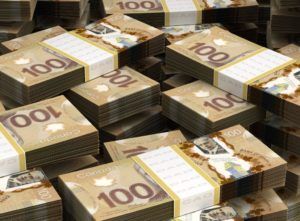 The total compensation for the new CEO at Ontario, Canada-based Canopy Growth was an eye-popping $33.8 million (45 million Canadian dollars), according to the proxy statement the company released after the fiscal year ended March 31.

Most of that compensation – 96% – is in the form of stock-based awards, which means CEO David Klein isn’t in the money quite yet.

Canopy reported a loss of CA$128 million for the quarter ended June 30.

MJBizDaily takeaway: Executive compensation, including how to ethically and responsibly reward chief executives, has been a hotly disputed topic in the cannabis industry.

Klein’s pay is the highest-ever in Canada’s cannabis industry and is among the richest across all sectors.

The compensation for Klein, who began his job in mid-January, is equivalent to 1,042 times the median pay for the producer’s other employees.

Incentivizing executives is important, but at what cost?

While the coronavirus pandemic has upended some sectors of the economy – think travel, restaurants and retail – the marijuana industry continues to report record sales in several states, the latest being California, Colorado and Oklahoma.

California reported record sales of $348 million in July. Colorado’s recreational marijuana sales in June hit a record $158.1 million. And Oklahoma’s medical marijuana tally is on pace to be twice as high as last year.

But that hasn’t happened in California or elsewhere.

Sales remain robust. In fact, the pandemic might have lent support to the industry after most states declared cannabis an essential business.

Meanwhile, some have speculated that the U.S. government’s decision to discontinue the $600-a-month unemployment benefits could throw cold water on sales.

That has yet to be determined. Talk of restarting the weekly benefits at $400 could help sustain the retail sales numbers.

Although COVID-19 is a respiratory-based illness and there was an outbreak of lung-related illnesses caused by vaporizer products last year, cannabis consumers in both the U.S. and Canada are still buying vape pens.

Vape sales in key U.S. markets rebounded at the beginning of 2020 and stabilized only a few percentage points below their peaks in June 2019.

In Canada, vape pens are the most popular “Cannabis 2.0” product in three key provinces.

MJBizDaily takeaway: The convenience of vape pens remains a key selling point. Also, they’re not as commonly shared as their major competition – pre-rolls – so they still make sense during a pandemic.

Consumers are also showing confidence in the safety of legal, tested cannabis vaping products versus the untested vape pens sold on the illicit market that are thought to have caused the 2019 vaping health crisis.

Florida-based Springbig raised $11.5 million and Chicago-headquartered Fyllo announced the completion of a Series A2 round that brought in $10 million, bringing its investment total to $26 million.

And in July, LeafLink, a marijuana industry wholesale inventory and ordering platform, raised $250 million in a credit financing deal to help provide funding to the cannabis supply chain.

The New York-based company plans to use the capital to pump liquidity directly to licensed cannabis businesses.

MJBizDaily takeaway: Investor optimism could be returning because of the solid stock performances of several prominent cannabis companies. Plus, with states reporting record sales each month, as noted above, investors have something to be bullish about.

Montana residents will decide in November whether to legalize recreational cannabis after an initiative gathered enough signatures to put the measure on the ballot.

MJBizDaily takeaway: The finer business points of the program have yet to be decided, but smokable flower would be allowed, which is a major revenue driver. On the flip side, adult-use products would be taxed at 20%.

If the measure passes, license applications would begin by Oct. 1, 2o21.

Workers at a cannabis growing operation in Massachusetts unionized, signalizing the latest victory for organized labor in the marijuana industry.

Employees at Cultivate Holdings in Leicester voted to join the United Food and Commercial Workers Union, making the organization the bargaining agent for employees.

MJBizDaily takeaway: This is another step toward cannabis becoming like other mainstream industries – and a welcome development for workers seeking the same negotiating power as those in other labor-intensive businesses.

The UCFW and other labor organizations continue to make progress in unionizing cannabis companies in states across the country.

Pandemic-related safety concerns are among the issues spurring the unionization efforts, as well as pay, benefits, scheduling, recognition and having a say in a company’s future.

Decision On Potential Privatization Of Cannabis Nb Coming Once Government Sworn In: Higgs

How to summer detox with the help of cannabis

Decision On Potential Privatization Of Cannabis Nb Coming Once Government Sworn In: Higgs

How to summer detox with the help of cannabis