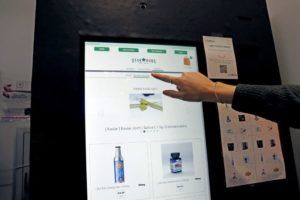 An Anna cannabis vending machine in action at a Star Buds dispensary in Aurora, Colorado. (Photo by Christa Madrid)

A new cannabis vending machine has hit the market in Colorado, with other states on the horizon, but the automated dispensers must overcome a host of challenges to become a regular part of the marijuana retail landscape.

Beyond stores, vending machines could also serve as points of sale in remote areas such as rural communities that can’t support a full dispensary.

“I think it will be years before we see cannabis vending machines take off in the U.S.,” she said.

Some vending-machine companies were reluctant to disclose the pricing for their products, although one business quoted a price tag of $16,000.

“I would not say that the average machine manufacturer has gone out of their way to try to pitch these,” he said.

Maras said modern technology can verify IDs and accept cash, but those functions make the machines more complex and expensive.

Regulatory compliance is another challenge. In Canada, federal law presents a major obstacle.

Corey Yantha, president, founder and CEO of Halifax, Nova Scotia-based Dispension Industries, pitches his company’s unattended Verified Identity Dispenser as a “low-cost way to service legal cannabis in all corners of the country,” including rural areas where a brick-and-mortar store doesn’t make sense.

But Canada’s Cannabis Act generally prohibits selling marijuana through a “self-service display” or a “dispensing device,” meaning Dispension’s machine can’t be used to sell cannabis in that country for now.

Yantha is confident, however, that the law will be adjusted to permit automated sales.

In the meantime Dispension’s machine is being used to distribute scheduled opioids, and Yantha said the company is working to deploy the kiosk with an undisclosed U.S. recreational marijuana player.

“We’ve been demonstrating success with a more high-risk substance and with a more vulnerable population that demonstrates this technology is secure enough to distribute cannabis,” he said.

Yantha did not disclose the dispenser’s price but said it’s available on a turnkey-lease basis.

One new in-dispensary vending machine challenger is betting on banks of devices under human oversight.

Even though vending machines can be designed to verify age and identity, Matt Frost, CEO of Boston-based cannabis vending machine maker Anna, said the market isn’t necessarily calling for that capability.

“A lot of states – every state, really – wants there to be someone that’s accountable for those transactions,” he said.

After entering a dispensary and having their IDs checked, customers place their orders at an Anna machine. (Anna can be configured to scan IDs again if necessary.)

The machine alerts a supervising budtender to approve the order before the customer pays, and the machine dispenses product.

Frost declined to reveal Anna’s price tag but said the company’s revenue model is “based largely on sales volume.” He said a typical configuration might hold 600-700 products or more small products such as joints. 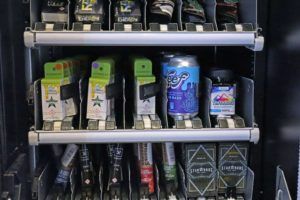 Anna recently launched one of its machines at a Star Buds location in Aurora, Colorado.

The location is Star Buds’ busiest, with up to 1,500 customers daily, said John Riggs, the company’s chief operating officer.

“If I can take 10 people out of line per hour during our busiest times, to me that’s a success,” he said.

Riggs said Star Buds and Anna have been working out kinks around point-of-sale integration and state and local regulations.

The Star Buds location is slated to move into a larger space soon, and Riggs said the expanded store will include two more Anna machines.

Another Anna machine launched at Strawberry Fields in Pueblo, Colorado, has been removed for now, according to Chief Retail Operations Officer Ethan Shean.

“We feel, at (this) time, it is not ready for the Colorado market,” Shean wrote in an email to Marijuana Business Daily.

“However, we are open to bringing the machines back into our facilities once we feel confident in a successful rollout.”

Anna’s Frost characterized that experience as a “pilot round.”

“We definitely learned a lot about the workflow and how to improve it,” he said.

Frost expects to launch Anna machines in California, Nevada and Oregon before year’s end and in Massachusetts in 2021.

Anna isn’t the only player in the vending machine space: Recently unveiled Buddy is a high-tech dispenser from London-based Social Vend.

Andrew Theodore, CEO of Social Vend, said he was inspired to create a cannabis vending machine after observing shortcomings in the competition.

“There’s not enough attention being paid to the consumer experience, right down to the aesthetics of the machine and the intuitive nature of the user interface. The whole package just isn’t there,” he said.

The Buddy machine starts at $16,000 before adding functions such as ID scanners and cash handling. Theodore aims to place the device in a premium dispensary.

Other vending machines appear to be receiving new interest:

Steve Lopez, CEO of Colorado retail chain The Green Solution, vetted in-dispensary vending machines as a way to increase customer throughput but ultimately decided against them.

“For the vending machine to be efficient, it needed to be stocked up with product, which limits the selection,” he explained.

“This kind of pigeonholes (customers) into, almost, the bestsellers that you would put in there, and (takes) away from the variety that our customers are used to.”

Lopez also considered lockers that could be stocked with online preorders for quick pickups.

But in the meantime, he noticed more customers using The Green Solution’s express windows, where shoppers can quickly pick up online preorders.

He found a solution that builds on those express windows: in-store kiosks where customers can place an order, then pick it up at the window a few minutes later.

“(It’s) very intuitive, very quick, and it meets that convenience (need) so that folks are in and out, two to three minutes,” he said.

On top of the drawback of limited capacity, Lopez was deterred by the high cost of adding cash-handling functionality to the machines he considered.

“It would be hard for me to find a vending machine that I was like, ‘That’s the one,’” he said.

“After we vetted them, it just seemed like a dead issue for us.”