CANNABIS CULTURE – Cannabis America, a product described on the company’s website as “the world’s safest, cleanest, and most effective cannabis Sativa L genetics.” The company is Bazelet Oglesby and their 0.00% THC Hemp does not qualify as a Schedule 1 drug.

Michael Elzufon is a director for Bazelet Oglesby and has worked for years in development. “We have a strong background in the genetics and the study of the molecular structure of cannabis Sativa L, and so that backdrop, that foundation that is rooted in science, helps develop this kind of an outcome.” He said in a recent interview with Cannabis Culture Magazine. 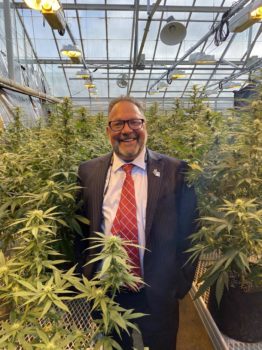 According to Elzufon, in a regulatory sense Cannabis America is “the concord grape versus the Bordeaux grape.  They are both grapes, but one of them is sold in a grocery store and bought and sold on the commodity market, whereas the other is very strongly regulated, and for due reason as this is alcohol.  So similarly, Cannabis America introduces us to a whole new paradigm, a whole new way to look at cannabis, or a new way to utilize science-based outcomes for our policy on cannabis.”

Elzufon continued, “Our regulatory environment has prevented the true benefits of the cannabis plant in the human diet and in the American economy at large, and central to all of that is the conversation about THC.  It has been the centrality of the needle in our regulatory framework. We have developed scientifically a solution that can allow uninhibited innovation with every part of the cannabis plant less 1 basic molecule.  That freedom of having literally 99.9%.”  The true heart of Cannabis America was “creating that cannabis plant that the federal government can identify with solid science.  Not opinion.”

Bazelet Oglesby is the child of Bazelet Health Systems and Oglesby Plants International.  Oglesby’s work combines advanced scientific processes with extensive knowledge of the way the human endocannabinoid system works.  The plan is to produce and send their prototypes to specific audiences of decision makers, industry leaders, researcher institutions, and physicians in their first shipment this year, with the ultimate goal being to create authorized producers and farmers in the US and expanding worldwide in 2021.

Currently Bazelet Oglesby has the capacity to produce over 10 million plants annually and has a tight-knit, highly skilled team working with more than a dozen countries worldwide.

Everything from bioplastics and batteries to clothing and milk can be made from hemp plants.  It is a more sustainable product than other forms of agriculture with the ability to produce large amounts in smaller spaces of land.  Hemp is also relatively easy to care for and durable, meaning security for crop harvests in otherwise uncertain times.   However, many growers have been worried about jumping through hoops and the potential legal ramifications that could come alongside growing hemp if the THC amount ended up being too high, which could mean elimination of entire crops without compensation.

So what might Cannabis America mean for the future of the hemp industry?

As an elite genetic strain with no discernable THC, and with the requirements for government-approved hemp having a THC level of 0.3%, industrial hemp farmers can now introduce these plants into their crops without regulatory concern.  These plants will be capable of being sold, transported and grown as one would any other type of farm crop.  As well, as these cannabis plants will not qualify to be classified as a Schedule 1 substance, this frees up healthcare specialists to safely and legally distribute cannabinoids products and derivatives to their patients.

Cannabis America is being modified and developed to be highly fibrous for use in aviation, textile and fiber industries.  On the FDC side (Food, Drug and Cosmetic), Elzufon says that “the Cannabis America plant, its extracts, and biomasses will be utilized by manufacturers the world over.. Confidently manufacturing a product they do not need to worry is on the Controlled Substance Act or any regulatory issue it may or may not have.. Because it (THC) is genetically not there.”

With the introduction of what they refer to as FCCs, or Federally Compliant Cannabinoids, Cannabis America “becomes that base ingredient that all the manufacturers in the nutrition space, the food and beverage space, phytopharmaceutical space can now confidently develop very good base genetics to begin their products with.”